You Meet the Nicest People on Two Wheels

On this holiday weekend, I took my V-Strom out for a circuitous 170 mile ride around Mt. Hood, and ended up meeting a pair of riders on a much longer journey.

To start, I left my home in Sandy, Oregon and headed east on Marmot Road, which roughly parallels the Sandy River. This is a rural road with many different ups and downs and twists and turns, and is a fantastic route for skills practice. It ends at Lolo Pass Road behind the mountain community of Zigzag. I turned north and climbed up and over Lolo Pass.

The Pacific Crest Trail crosses the road here and several cars were parked at the top. The pavement ends and I descended down the hill on NF 18 with an amazing view of Mt. Hood looming before me. The gravel road was in fairly good shape, but there were some hidden pot holes in shady spots.

Several miles down the hill, the gravel gives way to unmarked, single-lane pavement. Past the road to Lost Lake, I eventually made my way into the orchard town of Parkdale. I smelled barbecue as I passed Valley BBQ getting ready for lunch service. I connected with highway 35 and headed south.

My intention was to stop at CJ’s Chevron on highway 26, south of the 26/35 junction, and get a snack before continuing on. I pulled into the shade and parked next to a couple of riders doing the same.

It was a middle-aged couple riding a Honda NC700 and a Ducati 998. Both were loaded down with enough luggage to make a burro wince.

“Where are you headed?” I asked.

“Argentina,” the man said. He had a Dutch accent.

Shocked, I asked, “Where did you start?”

His wife clarified, “We flew over to Anchorage from The Netherlands and rode north to Coldfoot, but it was far too muddy to continue [north] to Prudhoe Bay, so we turned around.”

I introduced myself. Their names were Albert and Heiken. Animated and eager to talk, they described their trip so far and their goals.

Heiken explained that they flew their bikes over to Anchorage via FedEx, $1,700 one-way (It wasn’t clear to me if that was per bike or for the pair). Their intention was to ride up to the Arctic Ocean at Prudhoe Bay, then ride all the way south to the southern tip of Argentina before riding up to Buenos Aires and the flight back home.

“What about the Darien Gap [in Panama]?” I asked.

“We’ll put our bikes on a sailboat and go around it,” Albert lamented. He seemed disappointed they couldn’t ride the whole way. “We have to get to Buenos Aires by March, so we’re running out of time.”

Looking at the huge loads on their bikes, I asked if they were camping. “No, we stay in Air BnB’s and motels,” Albert said.

I was curious about Albert’s choice to ride a sport bike the entire length of North and South America. “It’s my bike and I love it,” he said. “It’s been great.”

When looking at the bikes more closely, I noticed they were both running sporty street tires. Heiken’s rear tire was squared off (flat) but Albert’s was fairly rounded and showed some tread remaining. No wonder they turned around when it got muddy at Coldfoot (which is north of Fairbanks, about halfway to the Arctic Ocean).

They hadn’t had any breakdowns or flat tires so far.

As we discussed more immediate matters, they said their destination for the day was an Air BnB in Corvallis, and they weren’t entirely sure how to get there. I knew where they needed to go, even though it wasn’t visible or clear on their map.

“I’ll guide you to Detroit,” I volunteered. “I’m going that way anyway.”

They eagerly accepted my offer. We suited up and pulled out onto highway 26. We rode south a few miles, and they followed me as I turned off onto Skyline Road toward Timothy Lake. I noticed they rode somewhat sedately, and with Heiken taking up the rear. I slowed my pace to make sure they could keep up.

We wound our way south along the crest of the Cascades, then over to the western slope where we headed downhill and met NF 46. That is the main route between Ripplebrook Ranger Station to the north and Detroit to the south. I pointed left and shouted, “That’s your way. Follow it to Detroit. I head north.”

Albert and Heiken gave me thumbs up and smiles and shouted back, “Thank you!” (We were all wearing our helmets with music playing in our ear buds, so verbal communications were symbolic at best.)

I left them and rode north and back toward home, feeling a tractor-beam pull to go back and ask, “Can I come, too?”

Published by Steve Williamson on July 7, 2013 Permalink
I rode 2,784 miles in seven riding days from Sandy, Oregon to the dual towns of Stewart, British Columbia and Hyder, Alaska during late June, 2013. I rode my 2007 Suzuki V-Strom 650. View subsequent posts for a detailed trip report and photos.
Filed under: Motorcycling and Tagged: Alaska, British Columbia, Suzuki V-Strom 650

Published by Steve Williamson on July 7, 2013 Permalink
I checked out of the Hudson Bay Lodge, loaded up the bike and headed northwest. The goal was to reach Hyder, Alaska. My GPS said I would arrive at 10:24 AM, which was great. I could stop, have lunch, sight-see a little bit, then head back to Smithers for the night. As I rode, 10:24 am came and went, yet I still had 100 km to go. I thought my Zumo 220 was out of its mind. When I finally reached Stewart, BC and crossed the border into Hyder, I noticed the clock on my bike said it was 11:24 am. Then it dawned on me that my GPS tells me the arrival time based on the time zone of my destination. Hyder is in the Alaska time zone while Stewart was in the Pacific time zone. 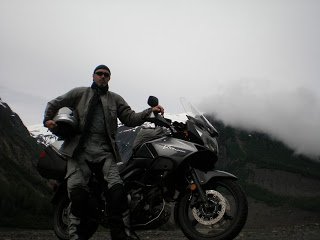 Just before I got to Stewart, I stopped in front of the glacier for a few photos, then crossed a narrow one-lane bridge that was erected after the original bridge got washed out by a flood more than a year prior.
In Hyder, I rode up the forest service road 88 to the Fish Creek wildlife viewing area. You can walk on elevated wooden walkways and see bears fishing in the creek below it. All I saw was the creek; no bears were present. Back in Hyder I stopped at the general store to buy a souvenir for my wife. The owner, a big guy with a head and beard full of white hair, asked me where I was from. When I told him I was from Sandy, Oregon, he smiled and said he was from Beaverton, Oregon, about 40 miles to the west of Sandy. 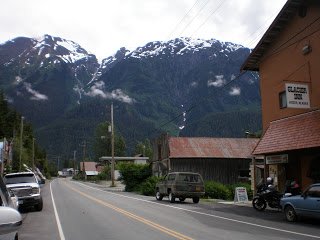 We chatted for a bit, then I headed over to the Glacier Inn for some lunch. This is a very charismatic place, where you can get “Hyderized” — drink a local form of moonshine. I never drink and ride, so I left with a full belly but no booze in me. Getting back into Canada and the tiny border crossing, a young gal named Cyr (pronounced ‘seer’) asked me several questions, then let me through. There is no questioning when going from Stewart into Hyder.
On my way back to Smithers I saw a cinnamon bear peaking above the brush on the side of the road. I made it back to Smithers under light rain and checked back into the Hudson Bay Lodge for the third night in a row.
Filed under: Motorcycling and Tagged: Alaska