A Riddle of Scars

A Riddle of Scars 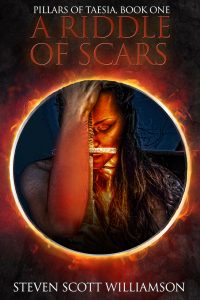 Book 4: A Riddle of Scars

The Taesian Chronicles is a series of fantasy novels set in the fictitious world of Taesia. The fourth book, A Riddle of Scars, was published in June 2019. A Riddle of Scars is available for Kindle and as a paperback via Amazon.com.

About A Riddle of Scars:

A Riddle of Scars begins the second trilogy, The Pillars of Taesia, and continues the story established in The Taesian Chronicles. Taking place twenty years after book three, Paragon’s Call, the story picks up following Kaedi, a young but skilled rogue — and daughter of the Master of Thieves. Her world is turned upside down in a brutal attack. She flees her hometown on a quest to learn the true identity of her mother, and along the way becomes embroiled in a twisted plot to overthrow the empire.