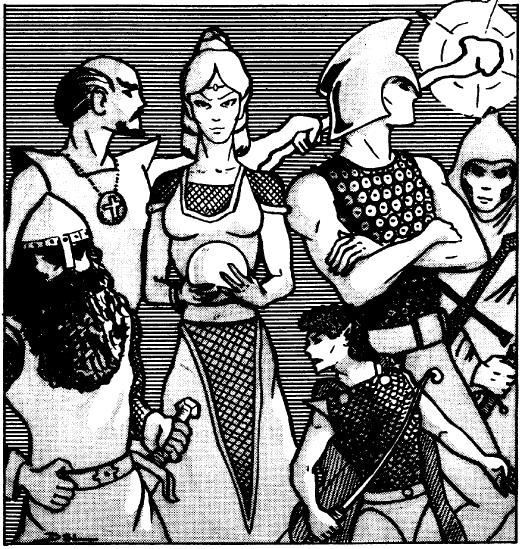 Sometimes Dungeon Masters need a little inspiration when creating one-shot sessions, or even multi-session campaigns. There are classic tropes and their variations that can be relied upon for ideas, they just need a new twist to make them interesting.

Other times you want something truly unique. Taking ideas from other sources and spinning them on their heads can help.

Here are some ideas to help spark your creativity. You can use these directly, modify them slightly to suit your tastes and the party’s situation, or make a 90 degree turn and somewhere entirely new. It’s up to you!

Rescue! One of the most common and old-school themes in fantasy adventuring is the rescue. The king’s daughter has been captured by foul enemies. The party is hired to infiltrate the baddie’s lair, find the princess, and get her out alive.

Twist: One of the party’s own has been captured and their comrades must rescue them.

Exploration. Some ruins have been discovered and the party explores it, either for their own effort to seek unreclaimed treasure, or because they’ve been hired by a powerful NPC to survey and map the situation. The location is where your creativity can really shine; make it someplace unusual, such as a mysterious keep or monastery that appears overnight, or a large abandoned ship that has washed ashore.

Twist: The party must explore a location with a time limit, because a prophecy or some other clue indicates it will disappear at a particular time in the near future.

Escape. One of the most exciting, challenging — and common — adventure ideas entails the party finding themselves held captive without weapons or armor, deep inside an unknown dungeon. They must escape their bounds, find their gear, and escape. The reason for their capture can be any number of things: they passed out at an inn and woke up in shackles (perhaps they were shanghaied and found themselves bound on board a pirate ship); they were infiltrating a Big Bad Evil Guy’s lair and were captured, etc.

Twist: An NPC in their party betrayed them and handed them over to the party’s enemy. Not only must they escape capture, but they also seek revenge against their betrayer.

Destruction of Evil. This may be the most common adventure trope yet, the destruction of an evil altar or temple. Don’t sell the idea short; it is used so often because of its versatility and applicability to the fantasy genre. The source of evil can have any number of variations, such a competing religious sect or a group of monsters that must be destroyed or driven out of an area. If it’s a place to be destroyed, it can be a variety of things, such as an altar, an entire temple, or a single artifact. The thing to be destroyed can, of course, be a person or particular monster.

Twist: For a longer, more challenging campaign, the evil can be a Thieves or Assassins guild that must be infiltrated from within. To put a spin on the more classic idea, the party must identify the source or location of evil first before they attempt to destroy it — or the source of evil keeps moving (a temple that magically changes location every week, etc.)

There be Dragons! Dragons are arguably the most iconic monster in fantasy adventure games. Ridding a village of a marauding dragon is a tried and true adventure hook. But don’t be afraid to throw some new angle on it. Perhaps the dragon is actually of good ilk but has been possessed by a demon. Does the party kill the dragon outright, or try to exorcise its evil host? Sometimes the party must subdue or capture a dragon, but what if their intent is to retrieve dragon eggs or younglings without engaging the parent (who would most likely wipe them out if confronted directly)?

Twist: In one campaign, my party came upon a green dragon and a black dragon of relatively equal strength fighting each other in the air above them. I allowed the party to take on the two dragons and role-play the battle. Once that dragon duel was resolved and only one dragon remained, the party then had to fight the wounded and weakened beast that remained. Another idea is for the party to discover a dragon in a compromising position, such as a wyrm in chains or weakened because of a prior battle. Another variation is for the party to meet an intelligent, speaking dragon and convince it to do something against its nature.

Gather Ye Weapons. Like the Marvel Universe storyline, the party must gather a particular set of artifacts, each with its own set of challenges, to create a new weapon that is used to counter some Big Bad Evil. A complication you can add to this is some evil person or group is also seeking the artifacts, motivating the party to act quickly. The classic AD&D module, White Plume Mountain, is a great example of this adventure type.

Twist: The party must replace a rare and heavily guarded item or weapon with a fake without being detected. Or, the party is hired by a powerful NPC to retrieve an item, but along the way they discover their benefactor intends to use the item for evil, so they find a way to thwart the NPC instead.

These ideas deviate dramatically from the common tropes and themes listed above. One of the best things about fantasy table-top role-playing games — or any genre, really — is the fun is limited only by your imagination. Sometimes it’s fun to let it run wild.

Some of these ideas are straightforward, while others are truly ‘out there.’

Infection. The party has been infected by a curse that will turn them into vampires within a fixed number of days. They must retrieve a magic item or reagent used for a potion to effect a cure.

Post-Death. The party has been slain and they find themselves in the land of the dead. Magic works very differently, or not at all, and many other things are turned on their heads. They must achieve some goal in order to return themselves to the living.

The Circus. The party has been captured by a low-level demon and placed in a zoo or circus on one of the planes of the Abyss. They must escape and return to the prime material plane.

Run Away! By chance, the party finds themselves face to face with a group of monsters in the wilderness that is substantially more powerful than themselves. They must flee enemy territory and survive long enough to cross a border or land feature such as a river or mountain range without being killed or captured.

Another Body. Because of a freak magical accident, the party finds themselves inhabiting the bodies of hobgoblin soldiers in a war party’s camp preparing to attack a nearby keep. The party learns a powerful cleric inside the keep has the ability to exorcise them and restore them to their original bodies. They must reach the cleric, explain their true identities, and convince them to help them before they all get killed in the attack.