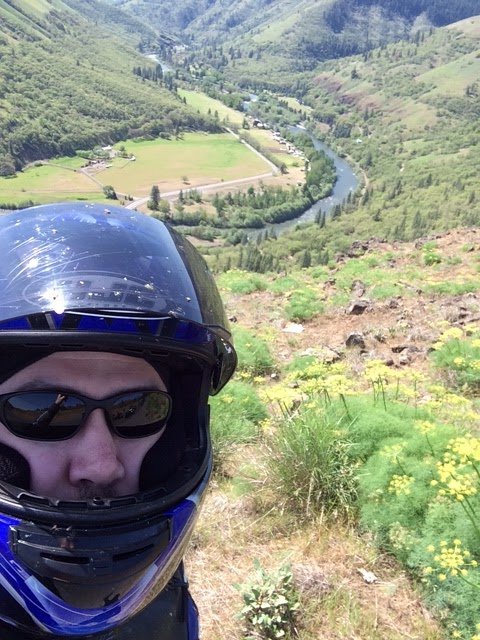 Recently, I went on a group ride with some riders on sport bikes and sport-standards. Other than one guy, I was the youngest of the group, with ages ranging up to 67. These gentleman all have a lot of experience on two wheels, and really know their stuff. Needless to say, I got schooled in a big way.

I won’t talk much about the route, because it’s not the point of this post, but I will mention it was 75% on roads that were unfamiliar to me. They were very familiar to the other riders, however, and that played into events to a certain degree.

I started off third in the line of seven riders. The leader set a fast pace in the corners, but wasn’t overly speedy on the straights, both because it was unnecessary and we wanted to avoid tickets. Without realizing it, I started off with ego in my helmet since I was the FNG and I wanted to make a good impression. Only one of the other riders was on a pure sport bike — a 2013 Kawasaki ZX-10R — I was on my 2012 Suzuki GSX-R750. Everyone else was on a sport-standard or hyper motard.

We soon got onto roads that were new to me, and I was doing everything I could to stay in the group. The two riders in front of me never seemed to use their brakes. Instead, they engine-braked into turns and flowed through them with ease. I became flustered by their pace and started making little mistakes. Those mistakes began to stack, and soon I found myself running hotter in corners than my comfort zone would allow. I made the additional mistake of braking too heavily, which stands up the bike and makes you run wide.

When we made our first piss stop, I hid my frustration and kept a smiling face. When we started off again, I waved everyone past except the guy on the 520 cc single-cylinder thumper. I figured there’s no way he’s going to pressure me. Boy, was I wrong. It turns out he was not only the oldest guy in the group (aged 67), but also the most experienced. He was on my tailpipe everywhere but the longer straights (where my 750 easily exceeded his bike’s top speed).

The rest of the day’s ride seemed to stack my rider errors. Ultimately, however, they all stemmed from my focus on keeping up with more experienced riders instead of focusing on my own riding. I was turning in too early. Mid-corner, I’d use too much brake and stand the bike up, making me run wide. I was target fixating on the pavement in front of me, looking for gravel and tar snakes, or I was target fixating on the line or the outside of the turn. My brain was wondering how much traction I had left in my tires, partially expecting them to break loose at any moment.

I grew frustrated at how smoothly and easily the other riders entered and flowed through corners at speeds much higher than me. I had to really gun it to catch up to them in the straights. To their credit, they never expressed any visible signs of frustration at waiting for the FNG to catch up. The difference in riding performance was all in my head, and I was becoming my own worst enemy.

By the time I got home, my clutch hand was in a lot of pain and my whole body was knackered. I was mentally exhausted, and I felt very disappointed in myself.

The next evening, I watched “Twist of the Wrist II” by Keith Code, on DVD. I’d watched that video a half dozen times before, and even though I intellectually had a pretty good handle on the techniques Keith teaches in the video, I felt a fair bit of shame at how miserably I failed to follow the given advice. There is a section where Keith talks about riding failures, or SRs, and I realized I had violated the majority of them.

A great deal of my failings came down to a couple of key principles. First, I made the cardinal mistake of worrying about keeping up with others rather than focusing on my own technique and pace. Second, I was riding beyond my ability for the season. I’ve had little time on the Gixxer so far this year and haven’t spent much time practicing my technique. I was rusty, and was riding beyond my ability at the time. Third, we were riding on roads the other riders have memorized but were brand new to me. If I had remembered that, I would have started in the back of the group from the start and not worried about trying to keep up. That fact alone would have made a huge difference in my riding.

I have contacted several of the riders since then and apologized for lagging behind. They were very supportive and encouraging, saying it’s much better to wait a few extra seconds for the FNG to catch up at the next junction, than to have to go back and rescue a downed rider. Three of the most experienced riders in the group gave me very good feedback and advice. They also gave me perspective, mentioning the wide experience gap between myself and them. It’s not feasible for me to expect to keep up with them, as they so rightly pointed out. Finally, they mentioned the fact that we were riding roads that are very familiar to them. That’s a big advantage.

My lessons learned are that I need to focus on my own pace, and not let ego push me beyond my limits and the limits of the conditions. I need to practice and reinforce my attention to the fundamentals of proper riding technique. Specifically, I need to look through the turn, work more on proper turn-in points, and not braking in the middle of the turn (which stands the bike up and makes me run wide).

If money and time allowed, I would really like to take some more classes. Attending the California Superbike School, or something similar, would be ideal. That’s not in the cards at the moment, but it’s a goal. Meanwhile, I intend to go on rides where I practice something specific each time. Head position, turn-in point, etc.

Filed under: Motorcycling and Tagged: technique
← Previous Next →