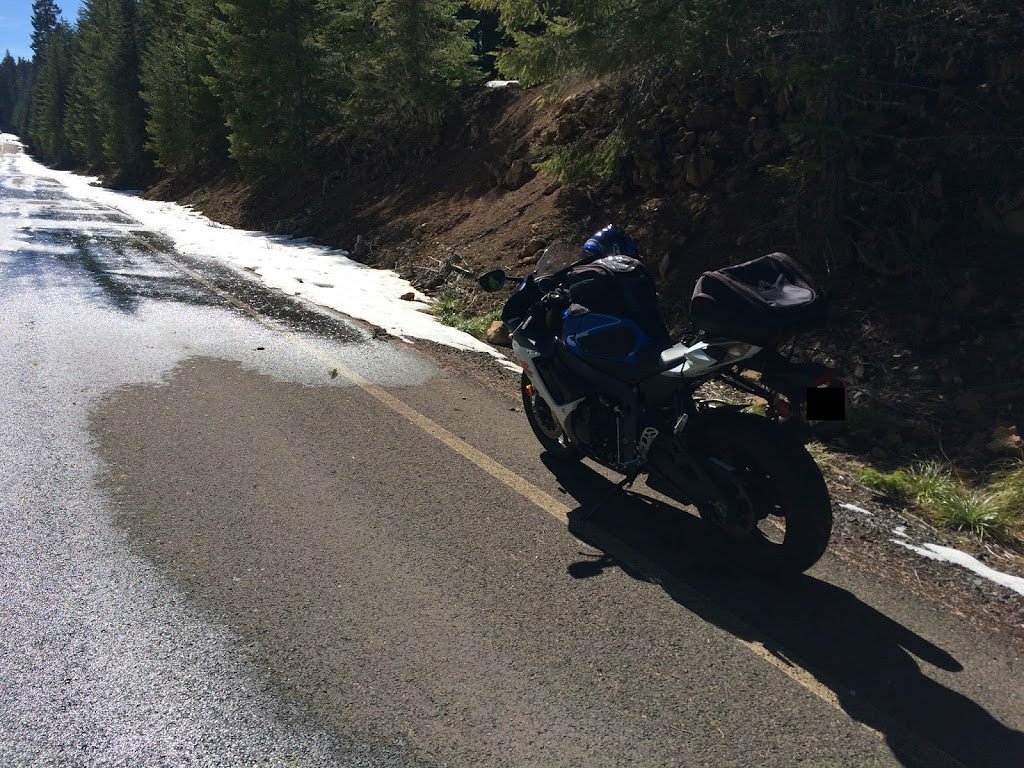 Springtime in Oregon is hard to beat when it comes to weather. 72 degrees and sunshine? Yeah, that works. Being a motorcyclist, you’ve got three guesses how I’ve handled it, and the first two guesses don’t count.

Two days in a row, I rode my 2012 Suzuki GSX-R750 “Shoot to Thrill” past Estacada, up highway 224 to Ripplebrook ranger station, and then south on NF46 toward Detroit. Both times I was turned back by snow, as I expected. What was surprising was how far I got before the road was covered enough to make me turn around.

Although I didn’t have a GPS on my bike, I would estimate the snow is at 3,300 feet elevation, and was within a few miles of the summit at the power lines. If you can get that far, the rest of the route should be open.

They are doing repair work at mileposts 31-37, and delays during the week are common. This is to repair damage to the cliff face after the big fire that occurred about a year-and-a-half ago. Highway 224 is in reasonably good shape, otherwise. NF46 has some issues, however. There are a few more potholes, some of which would give a sport bike rider a hard time if they were hit at speed. There are also some trees down, blocking portions of the roadway or hanging low over one lane. It’s best to take it relatively easy on the sighting lap before giving it the beans on the return leg.

When I rode up the first day, I met two guys on sport bikes stopped in the road. They told me the road was covered a mile ahead, and although a pickup truck had driven up through the snow and parked at the top of the hill, it would be impassible to all but a dirt bike with knobby tires.

One the second day, I rode to that point myself and stopped at the snow to take a break before turning around. On the way back, I came up behind a guy on a sport bike west of Ripplebrook. We zipped along until we came to the construction delay, and chatted briefly before continuing on to Estacada where we exchanged contact information. His name was Wayne and he was riding a 2013 Kawasaki ZX-10R. We agreed to talk more about future day rides on our sport bikes.

To paraphrase the old Honda slogan, “You meet the nicest people on two wheels.”