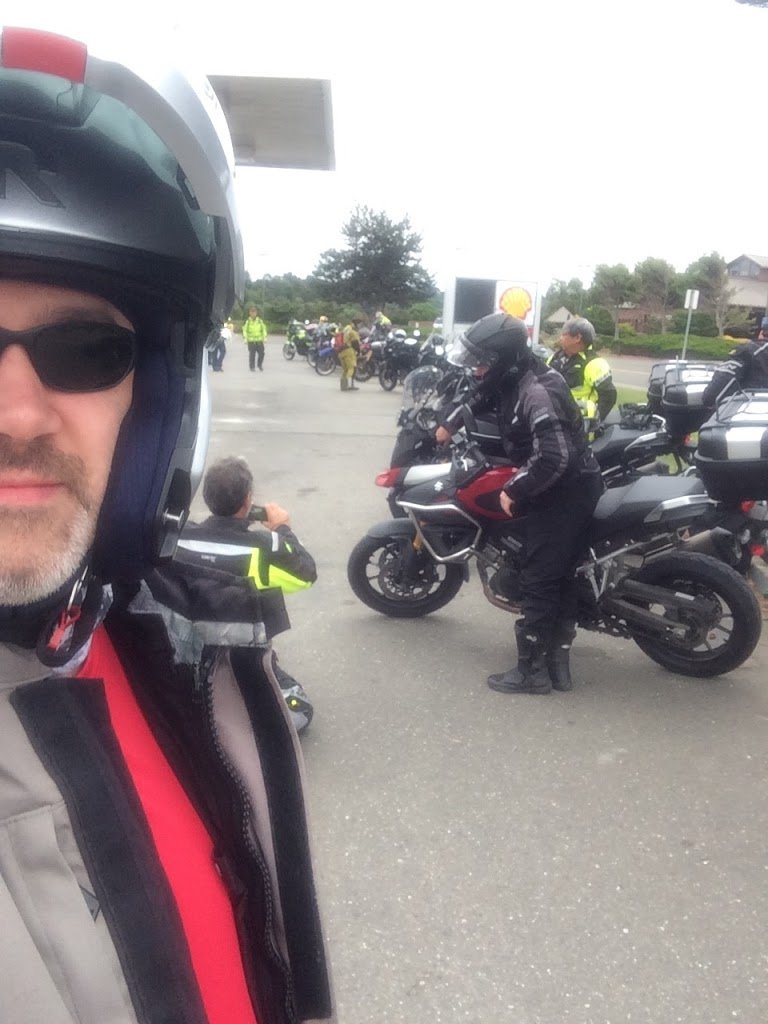 Over the past weekend, I attended the V-Strom Rider’s West Coast Rally in Fortuna, California. It was organized by two members of the Stromtrooper.com forum, Hans and Jeff, and included three rides, Friday, Saturday and Sunday respectively. I participated in the Saturday ride.

There were 15 riders in our group, on V-Stroms that ranged from the older set like mine up to brand new models with less than 5,000 miles on them. Rider skill was fairly well matched, but we tended to blend into two groups, with the faster team up front and the more cautious team in the rear.

There was a presentation by Jay of Sasquatch Suspension of Eagle, Idaho on Friday night and another Saturday evening by Richard of RAK Luggage. The presentations were very informative, with the suspension talk especially pertinent to me. I learned that my bike, with 62,000 on the original stock suspension, is way overdue for work. It explains why my bike is so unsettled on bumpy roads.

Our ride on Saturday was over one-lane paved and sometimes gravel roads that probably couldn’t be any bumpier. As a local put it, “when you run off the road and it gets smoother, you know you are in California.” Grades both up and down were pushing 15%, and there were more hairpins than at a hairdresser convention. I kept up with the group and stayed proud despite my bike’s serious lack of proper suspension and the fact that I was only bike with knobbie tires (Heidenau K60s).

We rode east from Fortuna on highway 36, south on Van Duzen Road just past Dinsmore, to the misty community of Zenia. Then we headed west to Redway where we stopped for lunch. Next was the crossroads of Honeydew, and a stop on the Lost Coast Road by Cape Mendocino. That location reminded me a lot of the pictures and video I’ve seen of Scotland. It was absolutely gorgeous.

We then looped northeast to the Victorian and quaint town of Ferndale before returning to Fortuna.

Dinners both nights were at the Eel River Brewery, and there were a lot of laughs and great conversation. I made several new friends, and came away from the experience realizing we need to steal Honda’s old slogan:

“You meet the nicest people on a V-Strom.”

[Photo: One of the riders skipped his step-mother’s 80’s birthday party to attend the rally, so the group did what they could to make up for it. As he reported: “My stepmother wants me to be sure to thank all of you for the birthday greetings. She went on for several minutes about how wonderful the photo was. Sounded like our pic was the talk of the day. It certainly did the job of keeping me out of trouble for being with y’all rather than at her 80th birthday celebration.”]

Filed under: Motorcycling and Tagged: Califoria, Fortuna, v-strom
← Previous Next →