I slept well. The complimentary Best Western breakfast wasn’t too bad, especially compared to many others, with plenty of protein options and surprisingly good coffee.
It misted during the night so I had to wipe the dew off my bike before loading up. While watching a rerun of M.A.S.H. in my motel room last night, I heard Colonel Potter say something profound:
“The only guy I have to beat is the man I am right now.” 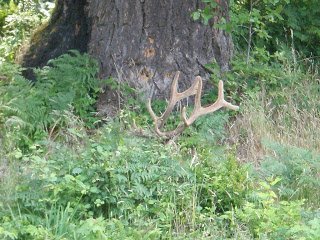 The ride continued south on Highway 101 and was pleasant with mostly cool air and occasional fog for dramatic effect. I stopped frequently because I had a short distance to travel and a long time to get there (unlike my previous trip to B.C.) Lunch was at the Subway in Crescent City.
Along the way I detoured through Prairie Creek Redwoods park and took a photo of a large bull elk, still in the velvet, having a lay-down snack in the brush.
Other than some slow drivers and a smattering of construction delays, it was an uneventful ride.
Dinner was piping hot fajitas and organic ale while chatting up the locals at the Eel River Brewery next door to the Super 8 in Fortuna.
Quote of the day: “I’m not one-dimensional but sometimes I make a good point.”

Filed under: Motorcycling and Tagged: Coos Bay, Fortuna
← Previous Next →